You are at:Home»Fitness»Fitness Accomplishments – Tips from an All Natural Powerlifter

As a young man growing up, I did not like my physique at all. I was one of those skinny guys with a fast metabolism. I never ate right as a kid which I imagine was part of my issue. Having such a hard time putting on muscle, I ended up reading everything I could get my hands on about training and nutrition. I made mistakes on the way by trying to do workout routines that were for far advanced lifters and people who used steroids. Those routines, I quickly learned were not for me. I also learned that many sales advertisements were very misleading. I would grab the new issue of a muscle magazine and see a guy that was a monster holding a product. They would have a quote around the ad such as, “This is a big part of my training and success”. At that age, I had no idea the person in the ad was being paid to promote the product and was on steroids. The sad truth is that I would never look that big and muscular from taking those products.

At 16, I started racing motocross and TT racing at a speedway. Needing upper body strength, I did some weight lifting and was just scratching the surface of real strength training. I raced for about 7 years doing well with over 140 trophies to show for my hard work in the 125cc, 250cc and 500cc classes. I decided to walk away from the sport for personal reasons.

I started looking for natural fitness information to take my workouts to a new level. I purchased a nutrition almanac which was loaded with information. I read anything and everything I could get my hands on regarding weightlifting that was not written by people who used strength enhancing drugs. I bought a sand filled plastic weight set, a bench and did chins in the garage using the frame of the roof trusses. 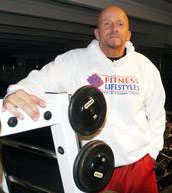 After years of training, some friends talked me into competing in a bodybuilding competition. Boy, was I nervous! I had no help regarding how to pose, train or eat, other than things I read about. I competed and went home empty-handed. I was not a happy camper. I vowed I would return the next year, which I did and placed 4th in my class. Knowing I could do better, I went back the following year and placed 2nd in my class. After that year, I entered two contests a year placing 1st in a small one and 4th in a state level event. The next year, I won my class and the overall in a local event. I went and competed one more year taking a 4th and a 2nd in two state level meets and decided to walk away from competing after a competitor at the state meet asked me why I was not on anything. He said if I wanted to be competitive, I had to do the juice. He won the meet and I placed 4th.

I just kept working out after that for years not thinking anything about competing. Then one day, I decided to enter a powerlifting meet as it was a drug free meet. I had no idea what I was getting myself into. I had no bench shirt and no deadlift suit. I drove 3 hours to compete in the meet and stayed at a hotel the night before. I was unable to sleep one minute the night before because I was so fired up. The day of the meet, I walked in and asked if I could get my money back telling the meet promoter I didn’t get any sleep and was exhausted. He told me why not give it a try since you drove all this way? Well, I did just that and competed in different divisions in squat, bench press and deadlift winning 4 national titles. After that, I never looked back.

Thus far, I have placed in many competitions with 27 world titles, 52 national titles, 46 regional titles and 6 best lifter awards. All which are all drug free lifting federations. Looking back, yes, it’s an accomplishment but it’s no big deal. They are really nothing in the big picture of life.

I feel my greatest accomplishments in life do not include lifting. They are much greater than that. They are speaking at area schools and churches about fitness, nutrition and the choices we make in life. When I receive thank you notes from kids at the schools telling me that my speech made them want to be a better person, makes me very happy. Some say they are going to quit drugs and provide other positive comments. Helping people become confident and strong both physically and emotionally is a true calling for me. Helping kids believe in themselves and show them that people care about them as a person is very important. That they can become anything in life they choose with a hard work ethic is one of the core things they need to focus on. Being stopped and asked by a friend dying of cancer, if I would be a pall bearer for her, when she passed was something I was very honored to do. Encouraging her in the last months and weeks of her life was special. Risking my life to save the lives of two strangers were huge accomplishments for me. Also, raising money for SIDS, St. Jude Children’s Hospital and the American Cancer Society. These are a few things I have felt good about in my life, more than my athletic achievements.

We should all strive to help make the world a better place for mankind and especially for all the children growing up. Life is not just about being personally successful, but it’s also about being successful in the lives of others and making a positive difference. We take nothing with us when we pass, only the things we have done or not done while we had our gift of life.