You are at:Home»Fitness»Set Point Theory – Is This Fitness Idea Really Fact or Fiction?

I used to believe that most diet and exercise theories were either good or bad. However I’ve come to understand that there is some good in the worst ideas and vice versa. However, when it comes to the theory that we all have a programmed set point, I want to bash my head against something hard and immovable.

The set point theory is one of those few diet and exercise theories that simply must go! The basic premise of the set point theory is that our bodies have some sort of internal thermostat that keeps everything from body fat to muscle strength at a specific “set point”. Any attempt to go against that set point is going to be futile because you’re always going to return to that level.

Boy, talk about your motivation draining theories! I would hate to work hard and sacrifice knowing that all I’m doing is prolonging an inevitable back slide. Sure, we could argue that if we lose ground we can always make it up as well, but that’s not much fun either. I like working hard to move forward, not to simply reclaim something that’s been lost.

Well, I for one like believing that the world is filled with potential and the possibility for advancement. I don’t want to believe that getting stronger is going to be fighting my own personal set point. If there is anything I believe in, its using diet and exercise to improve my body through harmony, not by fighting it.

I believe I can change my fitness, and I believe everyone else can too. We are not doomed to fight our own programming. We can change, and the proof of such change is taking place all around us on a daily basis. Loads of people are taking action and making their changes stick for years at a time.

The biggest reason why I don’t believe in the set point theory is the fact that there are lots of folks who change their fitness level and never look back. Heck, my best friend lost over 100 pounds and never gained it back despite some pretty challenging physical ailments that left her without the ability to exercise for months at a time.

Plus, you can take into account all of the success stories we hear in magazines, online and through other media sources. If the set point theory was true, these sorts of long-term changes should almost never happen.

Actually, set point theory might even make the whole notion of getting in better shape at all, simply impossible. Why would the body change at all, if it’s in its best interest to stay the same? The human body is pretty quick to respond to stress and stimulation. From the instant you prick your finger or stub your toe, your damage control systems go to work. I find it hard to imagine that it would take weeks or months for the body to turn on the signal to bring itself back to its original state.

But then again, how can someone explain the fact that so many folks who try to lose weight or get stronger fall back to their original condition? I have a couple of ideas. I think the primary reason for this is because many fitness changes are built upon a weak foundation. We are all familiar with the idea that it takes a “lifestyle change” to lose weight or get in shape. What I take this to mean is that we must make various changes in many areas in our life to effect lasting change. 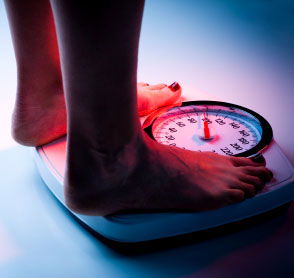 I for one have about 101 different things in my life that support my level of fitness. So you can take away my bike racing, my love of sushi or my home gym. I still have many other supports that will keep my fitness level propped up nice and high.

However, if someone has 101 things propping up an unhealthy lifestyle there is a lot that is going to have to happen to bring that sucker down. If they are trying to build upon a new foundation of health and only make one change (like cutting back on sugar or walking a mile a day), the foundation is not very solid. It’s only going to take a minor stress in their life to break that support and send all of their efforts to change, toppling down.

With the recent efforts to change now in tatters, it’s only natural that the individual would go back to old lifestyle habits. I call this going back to square one. When the membership is quit or the diet is trashed, the whole plan is scrapped and the individual goes right back to their old habits with their body following suit.

Truth be told, most folks who are successful at getting in shape abandon or quit lots of diets or exercise programs. The only difference is that they don’t throw out the entire package and go back to where they started. Instead they throw away the parts that were not working for them and they keep what did work.

So maybe the whole low carb thing didn’t work so well for them, but maybe they discovered that giving up sweets during the work week was a good thing and kept up the habit. Maybe those Yoga classes didn’t work out, but that doesn’t mean they didn’t incorporate some poses into their cool-down period after a run to stretch out.

The point is simple. If you constantly cherry pick what worked and what didn’t, your game plan will never revert back to square one and neither will your body. If anything, you can expect to see consistent progress for years to come. Even still, there are those who will cite physiological changes that occur when someone loses weight that might suggest the body is trying to revert back to its former self.

Admittedly I don’t know too many details, but I do have lots of questions about these changes.
Questions like, are these changes temporary and an acute response to a stress upon the body? The same thing happens when we exercise. We get tired and sore, but does that mean our body is attempting to get us to stand still?

Maybe these hormonal fluctuations are short-term, so while they might be telling the body to regain the lost weight, it might be for a short period of time while the body gets used to the new body fat level it now has. I also wonder if some of these “rebound” reactions to lifestyle changes are due to taking something out without putting something back in.

We humans are pretty good about keeping things in balance. If we lose a job, an appointment or even forget to brush our teeth, things can seem incomplete. Maybe the physical cues to pack on more weight are not so much from the weight loss itself but from taking something out. I wonder what would happen if we found a replacement, like replacing some sugary snacks with a fun activity.

In any case, there are a lot of unanswered questions surrounding the set point theory. My main goal is to keep a shred of doubt that such a thing may be scientifically true. By doing so, I can keep futility at bay and increase the vast realm of possibility for how far we can really go.