Over acidity can become a dangerous condition that weakens all body systems. It is very common today. It gives rise to an internal environment conducive to disease, as opposed to a pH-balanced environment which allows normal body function necessary for the body to resist disease. A healthy body maintains adequate alkaline reserves to meet emergency demands. When excess acids must be neutralized our alkaline reserves are depleted leaving the body in a weakened condition.

As the primary response of the body to all stimuli is to produce an acid, we must effectively neutralize and eliminate these metabolic waste products to maintain the efficiency and integrity of the biological machines that we inhabit. Unfortunately, in this modern age of technological wizardry this is becoming increasing more difficult, if not impossible.

In a nutshell, stress produces acid and everything is stress. Since the body does not differentiate stress or its response to stress, the net result is always the same, an acid must be produced.

DEALING WITH ACIDS
On any given day we are exposed to enough opportunities to overwhelm the biological buffering systems by producing excess acids. While acids are produced by the body as a normal function of cellular metabolism and are increased during times of stress (which are circumstances that stimulate the sympathetic nervous system) we are constantly challenged to neutralize and eliminate the waste product.

On a 24 hour cycle any acid not neutralized and excreted must be stored. The storage systems of the body are as unique as the complex buffering systems. Ultimately, the goal of storage is to eventually metabolize the excess out of the system.

The more acid that is produced multiplied by the length of time that it is produced will determine the level of storage and the nature and extent of damage produce by the stored waste product.

The first storage system utilized by the body is that of the interstitial fluids (the fluids which permeate all the tissues of the body). This is the fluid in which all of the cells of the body float while conducting the business of the day. When this storage facility is full the body begins to store the acid wastes in the tissues, organs, and glands.

While symptoms and isolated dysfunction vary from individual to individual at every level of storage, by far, the most dangerous and devastating damage occurs with the storage of waste products inside the cell.

In a word, when the pH deviates too far to the acid side inside the cell, cellular metabolism will stop, and as the cells become poisoned in their own toxic waste, they die.

The nature and extent of the symptoms manifested and functional disability expressed will inevitably correspond to the cellular environments affected exhibiting dysfunction to degree that they are affected.

EFFECTS OF ACID PRODUCTION
As one of the organs designated to by the body to deal directly with this accumulation of acid the Liver is a major housekeeping organ for our biological systems in that its enzymes are elevated between one and three a.m. specifically to negotiate the elimination of this stored waste from the body.

One of the reasons that we use first morning urine for assessment of the integrity of the biological environment is to quantify the acid related activities that occur during the sleep cycle.

First morning urine will subsequently allow us a look at the buffering capacity of the kidney during this active elimination phase, while giving us an idea of how much acid has been produced and for how long it has been being produced. The following examples demonstrate the magnitude and intensity of this dilemma when allowed to develop unchecked in an unsuspecting biological system.

Example 1:
The accumulation of acid into the cellular environment is usually one that has proliferated unencumbered over a long period of time. The initial biochemical consequences of this accumulation are the elimination of the trace minerals, Magnesium, Potassium, Calcium and Sodium from the body.

The subsequent alterations in function involving the intracellular environment include alterations in the structure of the DNA that causes and allows for the DNA to initially replicate in an altered form. This is due primarily to the leaching of electrons from the DNA structure.

Despite a sodium-sparing device that operates in the kidney, this mineral leaching produces dramatic and powerful effects on every system of the body, particularly those most susceptible to dysfunction genetically.

This is why the symptoms of acid waste will vary from individual to individual and it is also why symptoms are usually a poor clue as to why the body is struggling. Unless the symptoms can be associated with a cause, the likelihood of a productive long-term outcome is questionable.

Since trace minerals and free electrons are two of the most valuable raw materials for all of the biological systems the body will typically prioritize the systems to shut down in response to the lack of supply for its metabolic demands.

Typically, in the earlier stages of this phenomenon an individual will already be experiencing symptoms of fatigue, depression, lack of energy, lack of focus, sleeplessness, irritability, headaches, weight gain and memory loss.

Example 2:
The following example is an illustration of the typical biological response of the body to a chronic excess accumulation of acid waste.

Excessive acid is produced over a long period of time and begins to take its toll on the buffering capacity of the body while overwhelming the storage facilities.

One of the body’s primary buffering responses to the accumulation of acid is to begin to alkalinize the blood. One of the buffering systems for the blood is created by increasing the oxygen carrying capacity of the blood.

Over a long period of time this reduces the oxygen available for cellular respiration and combustion of free electrons for the production of ATP (the energy currency of the body).

In addition to diminishing the oxygen available for cellular respiration and combustion, since oxygen is also a free radical, the probability of excessive free radical damage in the cardiovascular system is accelerated during this process.

Typically, by this time, the salivary pH (reflecting the integrity of the digestive and lymphatic systems) has also become excessively alkaline. The lymphatics and the blood are considered to be circulatory fluids and will usually parallel the activity of the other.

The functional result of this alkalinizing in the digestive system is the deactivation of digestive enzymes. Assuming that there are any nutrients available to be digested and absorbed (specifically trace minerals), they will, at best, be incompletely digested in this environment.

The problem is now severely compounded as excessive acid production is produced by the oxidation of fats, carbohydrates and proteins.

Therefore, the body has no choice but to seek out raw materials to produce buffers from an alternate source. This source is typically bone. So now, the body begins leaching Calcium and Phosphorus from bone tissue to produce buffers while creating one form of secondary metabolic Osteoporosis. 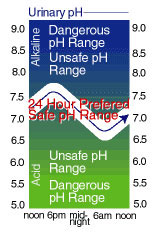 One of the foremost trace minerals driven from the body in an excessively acidic environment is Zinc.

One of the most corrosive and abundant acid by-products is called Carbonic acid. An enzyme called carbonic anhydrase, which is dependent upon Zinc, regulates its creation and elimination. The body utilizes this mechanism because, aside from being highly volatile, the carbonic acid is readily converted into base components for immediate removal or storage for later removal.

So, as acid accumulates, zinc is driven from the body. The body depends upon this nutrient to create the enzyme that creates the acid and eliminates it.

So, now the body has to work harder in a compensated environment to produce more poisonous acids which require additional trace minerals which have been driven out by the hyperacidic environment and are no longer available to assist in neutralizing or removing this toxic waste from the body.

So now, as the body is over-burdened and under-supplied, multiple systems begin to fail and the body begins to shut down. Played out continually over many months, or even years, these biochemical stressors can create far-reaching consequences throughout the entire biological environment.

I have simplified these three examples for the purposes of illustrating the mechanisms available to the body as it attempts to normalize and maintain optimal pH throughout its delicate systems.

However, these are very common and typical examples of reversible processes created by altered pH, if identified prior to the systemic breakdown described in the third example.

A long-term acid ash producing diet creates a toxic environment at the cellular level. If the cells can’t function, the body ceases to function. On the other hand, a healthy diet creates an environment that is conducive to cellular and total health.

For more information on how to create and maintain this environment please see my article entitled “Top eight tips for improving your diet“.