You are at:Home»Health & Wellness»Body Acidity – Problems Caused When Your Body is Too Acidic

The Issue of pH
Obviously, the pH level of our internal fluids affects every living cell in our bodies. The effect that over-acidification can have upon overall health is immense. A chronically over acidic pH creates an extremely negative environment that then affects all cellular functions from the beatings of the heart to the neural workings of the brain.

When our pH level is unbalanced, almost any area of our bodies can be negatively affected creating results such as cancer, heart disease, obesity, weight problems, allergies, fatigue and premature aging as well as problems with our nervous system, cardiovascular system and muscles.

On a very basic level, the body is an acid-producing machine. As the body engages in its daily encounters with all of the physical, biochemical, and virtual occurrences, it responds and changes in reply.

On a gross biochemical level, these changes involve producing a metabolic waste product in the form of an acid. The body is designed to produce and eliminate this acid on a twenty-four-hour cycle. If more acid is produced than can be eliminated, it must be stored. Since acid is by nature corrosive, the body must create and retain buffers to neutralize the stored acid until it can be eliminated. How much buffering takes place depends upon how much acid is produced over what period of time, and how effectively it is eliminated. These same factors will determine what source of raw materials is used in the buffering process.

We have learned that the kidneys are one of the organs responsible for removing acid. Actually, they remove more acid than any other buffering system of the body. However, the only way to transport excess acid to the kidneys is through the bloodstream.

When we combine the sensitivity of the blood to alterations in pH with the buffering capacity of the kidneys we can easily see how a potential bottleneck might occur as the body frantically attempts to dispose of this corrosive waste product.

Since, for every action, there is an equal and opposite reaction, we can also see how, eventually, every system of the body might be affected by the accumulation of excessive acids and the inability of the body to continue to compensate.

As more and more acid is accumulated, storage capacity is diminished, and the body’s ability to manage the accumulation falters, the body slowly begins to suffocate in its own acid waste. By this time cellular metabolism has been severely compromised, enzymatic reactions fail to occur, nutrients are no longer available for repair and regeneration, wastes can no longer be removed.

In light of the cumulative nature of this phenomenon, it is easy to understand why a chronically acidic biological environment is considered to be the seedbed of most, if not all, degenerative diseases. 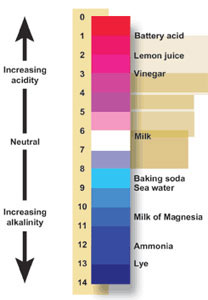 In reviewing the current medical literature, it is becoming increasingly evident that an acid pH imbalance is destructive to critical biochemical functions. There is evidence in the literature that this chronic imbalance has been associated with corrosion of the vascular system, while it accelerates free radical damage and contributes to premature aging. There is evidence linking it to weight gain, diabetes and obesity.

Obviously this environment inhibits metabolism of stored energy reserves while causing cholesterol plaque to form. In addition, it can disrupt blood pressure, as well as, lipid and fatty acid metabolism.

Finally, it has been associated with the inhibition of cellular regeneration, DNA & RNA synthesis, oxygenation of the tissues, and alteration of electrolyte activity. It has been linked directly to cardiovascular disease, arteriosclerosis, heart attacks, stroke, high cholesterol and high blood pressure. It has also been demonstrated to be a contributing (if not causal) factor to the formation of all cancers.

Meanwhile, it has been biochemically linked with diabetes, insulin sensitivity, obesity, neurological diseases (such as MS, MD, ALS, and Parkinson’s).

Having had the benefit of utilizing Quantum Fluid Analysis over the last several years in the care and management of hundreds of patients, I am personally of the opinion that alterations in all of the biological terrain parameters are predicated upon a progressive deviation in the acid/alkaline balance of the body.

Buffering Acid Waste
Earlier I alluded to the necessity of buffering or neutralizing stored acid. Initially, most buffering is performed by oxygen. The body begins this buffering process by increasing the oxygen binding capacity of the hemoglobin. This means that more oxygen is bound to the hemoglobin molecule within the red blood cells. This makes the oxygen unavailable for use on a cellular level. Initially, this has little, if any, effect on cellular buffering or energy production. However, over a long period of time, both functions are compromised. Before this compromise escalates to the point of irreversible damage, the body wisely shifts to another source of buffers. It turns next to the mineral supplies of the diet.

Sound familiar? Is it possible that the true cause of the “diagnosable disease” known as osteoporosis is actually an excess acid burden stored in the body? Obviously, this is a subject of debate, but from my personal experience, I have seen tremendous increases in bone density occur by simply assisting the body in the removal of the stored acid burdens.
The body becomes imbalanced and overly acidic primarily as a result of three things:

The Biological Matrix of the human body, just like the soil or Matrix that supports plant growth, requires very specific and balanced chemistries. Maintaining a balanced chemical environment includes the monitoring of the pH or acid-alkaline levels of the Matrix as well as assessment of the specific mineral, vitamin, electrolyte, enzyme and hormone levels. In addition, both the body and plants require plenty of biologically pure water, love and sunshine.

When a cell lives in an unhealthy Biological Matrix environment that lacks the proper pH it can become unhealthy and fail to thrive. Too few as well as too many nutrients and substances in the Matrix can interfere with the cell’s abilities to maintain the critical balance of elements that it needs to survive.

With prolonged exposure to these stressful conditions, the probability that the cell will lose its vitality and develop illness or disease increases significantly. With a lowered vitality and resistance, the cell also becomes more susceptible to the effects of microbes and organisms such as bacteria, viruses, parasites, yeast and fungus.

Imbalances Can Be Corrected
The immediate goal of any approach employed to address an acid/alkaline imbalance is to assist the body in eliminating the excess acid stores. Secondary goals are to restore normal function and prevent the imbalance from reoccurring.

While there are a couple of steps in this process and a couple of obstacles to achieving a productive response, the end result is highly achievable.

The Obstacles
One of the potential obstacles in normalizing the pH of chronically distorted biochemical environments is the loss of function that occurs in conditions that have progressively deteriorated over a long period of time.

In these cases it is usually more realistic to aspire to management of the current state while seeking to prevent further deterioration.

The other major obstacle is compliance. All too frequently an imbalance has progressed to a point where one of the following has occurred:

The Solutions
In the evolutionary stages of this emerging technology we were confined to meticulous, time-consuming, expensive, and labor intensive methodologies for restoring balance to these delicate biological systems.

Typically we would develop programs which addressed severe dietary changes coupled with intricate and specific biochemical substances which were capable of methodically reversing the biochemical aberrations caused by the excessive acid production and the subsequent alterations in the associated parameters of the biological terrain.

First we would start by introducing an alkaline ash diet to replenish the dietary sources of alkaline reserve nutrients. Generally speaking these are mostly raw, organic foods which are rich in trace minerals, antioxidants, and enzymes. The purpose of this diet is to cause a foundational alkaline shift in the bodily fluids.

Simultaneously we would introduce specific nutrients in the form of Oligo trace minerals (isolated trace minerals diluted in parts per million in an aqueous glycerin solution) to assist in pulling stored acid from the body.

Subsequently, we would attempt to re-saturate the tissues with trace minerals while attempting to neutralize the existing free radical activity with multiple individual nutrients designed to provoke a specific biological response. This entire process could typically take anywhere from three to six months, and in some cases up to a year.

While the development and application of specific protocols is beyond the scope of this article, one would do no harm and experience substantial improvement by implementing this simple generic foundation. Any altered human biochemical environment requires the inclusion of five specific substances to achieve stabilization, restoration and maintenance of the results achieved.