You are at:Home»Health & Wellness»Overweight and Unhealthy – Easy Steps To Avoid Getting Fat

I’m going to talk a little bit about some common weight management blunders. Throughout graduate school and through my work in the field of weight management, I came up with a list of things that contribute to being overweight, out of shape and generally unhealthy. It kind of stemmed off an idea from one of my colleagues when he mentioned the idea of an opposite test and I had a similar idea throughout school. I know there’s so many people in North America doing the wrong things with health and weight management and I thought maybe we should just look at what they’re doing and then do the opposite. From that idea, I looked at what people were doing that was not helping lead to success with weight management. I’m going to go over a few of these ideas and you can kind of think about each one. I had some extra motivation since I have seen his happening in my office a lot recently and it’s frustrating.

First off, skipping breakfast or just having a really, nutritionally pathetic breakfast is a big one. I have a client who’s about 350 pounds and he’s taking some gradual steps to losing weight. His breakfast consists of a light yogurt which is artificially sweetened, and a diet Pepsi. His biggest obstacle with nutrition right now is being famished and overly hungry at about 10:00am. Now, why could this be? Maybe because he’s having a light yogurt and a diet Pepsi which comes out to about 60 calories. He is probably getting more artificial sweetener than good nutrition for that first meal of the day. So, make sure to really try to front load those calories early in the day and take in a more substantial breakfast. That really is the name of the game when it comes to starting your day nutritionally. So number one, if you want to become overweight and obese is to skip breakfast. That’s kind of the opposite test rule here and I will be going through several more throughout this article.

The next step to making sure you will get fat is not eating enough during the day. Obviously that starts with breakfast but a lot of times people eat these pathetic little meals throughout the day and they don’t front load their nutrition and then by the end of the day they are just completely ravenous and they end up making bad nutrition choices.

I had a client this week who is eating three meals per day. Each of them are prepackaged, frozen meals, like Lean Cuisine type things. That’s under a thousand calories by the time it’s 6:00pm in the evening. This guy is about 260 pounds and he says that when it gets to be about 7:00pm at night, he’s ravenous and just completely starving. Really? You know, you’re eating about 800 calories throughout the entire day. No doubt you’re hungry! The ironic thing is that when I make a suggestion, like, “Try eating more food during the day and bring out some veggies, some hummus and have some nuts on your oatmeal in the morning.” His response to me was, “No, that’s too many extra calories and I’m going to gain weight.”

I think the biggest problem is being ravenous at the end of the day and eating a large pizza. That’s going to be too many calories. It’s not adding that little bit of nutrition throughout the day. So make sure and eat enough during the day so you avoid being famished later at night. We have a country full of chronic under-eaters. It’s amazing how you can get in that feast and famine cycle. Famine during the day and feast at night. Just like sumo wrestlers, right? So, step two for getting fat and unhealthy is by not eating enough during the day.

The third step is eating an extra-large dinner. This goes hand in hand with the first two steps. If you’re skipping breakfast and not eating enough during the day, you tend to eat a huge meal in the evening and then we go to sleep right after. And by that point you’re making bad nutrition choices anyway. So to become overweight and obese, eat an extra-large dinner. 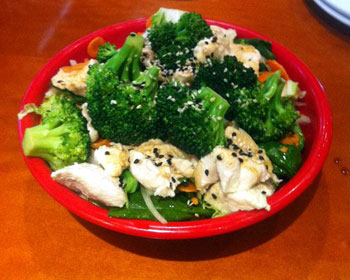 The next step on my opposite test is to not exercise four to seven hours a week. Four to seven hours a week of exercise is usually what it takes to achieve your body composition goals and health goals. Within about five hours you will start to feel much better about your body. Five hours is a good amount of time to split evenly among resistance exercises, conditioning exercises and flexibility work. So always make sure and match your expectations with what behaviors are taking place. If you’re doing a walk twice a week for 20 minutes, awesome! You’re on your way. But don’t expect radical body composition changes. That might only come when you get to the four to seven hour a week mark for exercise.

Don’t use the elevator. Anyway you can save energy during the day, do it if your goal is to stay fat and unhealthy. That will really help contribute to being overweight and obese. So use that elevator and keep gaining weight!

Don’t clean your house or wash your car. Hire someone to do it. You’ll lose out on money and extra physical activity. So you lose in both areas, great!

Use your car for trips under ten blocks. If it’s something where maybe you could walk to the store or your friend’s house or whatever it is. Don’t. Skip it. Use your car. Don’t expend any extra energy. That’ll contribute to being overweight and obese. Do everything you can do to set yourself up for failure in weight management. I’m obviously being sarcastic in this article to prove a point since I want to show you what things you might be doing to ensure you will stay obese and overweight. So, let’s move onto a few more steps.

How fast you eat your meals is an important step. If you eat your meals very fast, like five minutes, and you don’t allow that full twenty-minute time frame to elapse, you might not have enough time to let the signal go from your gut to your brain that says, “Hey I’m getting food and I’m satisfied.” So you need to allow at least twenty minutes when eating meals and just slow down your pace a little bit and truly enjoy the meal.

Regular dieting is a huge step for setting yourself for failure. The truth is that regular fad diets lead to being overweight. I’ve never met anybody who has been successful on a fad diet long-term. If you meet somebody, have them contact me and we can chat about it. So, regular dieting just makes you preoccupied with food and you’re out of touch with your hunger and satiety cues and you’re also too worried about detailed numbers of calories.

Sleep is a big one. There’s a lot of emerging research on the area of sleep. Less than six hours a night leads to the satiety hormones being out of whack and glucose tolerances out of whack which leads to eating more bad foods. Usually late at night is when people don’t make the best nutrition choices. There’s a lot of things that go hand in hand with sleep. It’s hard to expect an excellent exercise regimen too, when you’re not meeting your sleep needs. It’s kind of like the hierarchy of needs. You have to be well rested before you can have an amazing workout session.

So that’s part one of my opposite test on how to become overweight and obese. Before moving onto overweight and unhealthy part two, I will let you get a chance to digest some of these things and think about them and how they apply to your life.

Ryan has a BS in Exercise Science, a Master of Arts in Exercise Physiology, a Master of Science in Nutrition, and graduated from a dietetic Internship. He specializes in exercise and sports nutrition. See my profile page for more information!