More than 10 million Americans have been diagnosed with thyroid disease, and another 13 million people are estimated to have undiagnosed thyroid problems. Frequently misunderstood, and too often overlooked or misdiagnosed, thyroid disease affects almost every aspect of health. So understanding more about the thyroid, and the symptoms that occur when something goes wrong with this small gland, can help to protect or regain good health. It’s a concern that is widespread, can affect your overall health, and is obviously important.

A February 2000 research study at the University of Colorado Health Sciences Center, which was published in the Archives of Internal Medicine, found the estimated number of people with undiagnosed thyroid disease might be as high as 10 percent-double what was previously thought. This may mean that 13 million Americans are currently undiagnosed.

What You Need to Know
When a thyroid dysfunction is being considered, the usual suspects must be evaluated, too! The best advice in any decision-making process regarding a course of action for any suspected malfunction is to remember that function needs to be thoroughly evaluated. Predictably, this process should begin with the known (when you hear hoof beats, look for horses) but it should not stop there. This also applies to alternative approaches, especially when selected merely for the sake of choosing an unconventional venue.

Some people have had great success using only alternative medicine, while others must combine alternative and conventional. Frequently, symptoms are so vague in their expression that they elude the sensitivity of traditional laboratory analysis until they are permanently fixed in the form of a recognizable disease. In the case of the potential thyroid involvement described above, it is just as likely that the thyroid-like symptoms are presenting themselves due to the functional hypoadrenia described earlier.

This may be the early warning system suggesting that the body is compensating for a stress assault. The stresses can originate from any source of stimulation imaginable. Likewise, the symptoms can be portrayed in any form, or in any system of the body. What is seen is ultimately going to be determined by what is looked at and how it is interpreted.

Where Is The Thyroid and What Does It Do?
Your thyroid is a small bowtie or butterfly-shaped gland located in your neck, wrapped around the windpipe, behind and below the Adam’s apple area. The thyroid produces several hormones, of which two are key: triiodothyronine (T3) and thyroxine (T4). These hormones help oxygen get into cells, and make your thyroid the master gland of metabolism. 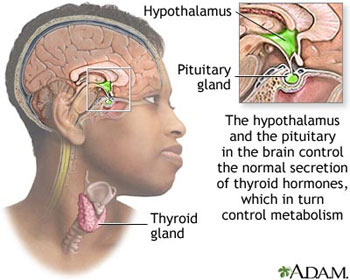 The thyroid has the only cells in the body capable of absorbing iodine. The thyroid takes in iodine obtained through food, iodized salt, or supplements, and combines it with the amino acid tyrosine. The thyroid then converts the iodine/tyrosine into the hormones T3 and T4. The “3” and the “4” refer to the number of iodine molecules in each thyroid hormone molecule.

When your thyroid is in good condition, 80 percent of the hormones produced by your thyroid will be T4, and 20 percent T3. T3 is considered the biologically more active hormone-the one that actually functions at the cellular level-and is also considered several times stronger than T4. Once released by the thyroid, the T3 and T4 travel through the bloodstream. The purpose is to help cells convert oxygen and calories into energy.

As mentioned, the thyroid produces some T3. But the rest of the T3 needed by the body is actually formed from the mostly inactive T4 by a process sometimes referred to as “T4 to T3 conversion.” This conversion of T4 to T3 can take place in some organs other than the thyroid, such as the hypothalamus, a part of your brain. 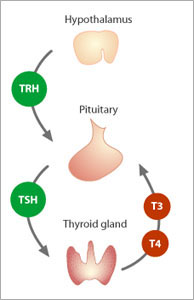 An overactive (hyperthyroidism) or underactive (hypothyroidism) thyroid can result in increased allergies, skin problems, fatigue, nervousness, gastrointestinal problems, sleeping too much or too little, gaining or losing weight, swelling, and various types of pain. Of these two possible imbalances, hypothyroidism is the most common. Doctors are aware of the six basic symptoms associated with hypothyroidism.

But these symptoms are minor compared to the effects thyroid deficiency can have on the body, since every cell in the body needs thyroid hormone. You may experience any number of the “text book” symptoms or none at all. Many people whose blood results are “normal” have debilitating symptoms of hypothyroidism and no hope of any help from the medical profession.

When dealing with the thyroid there are some other possibilities to be taken into account. Two of these may not be directly reflected in the conventional assessments of the thyroid gland, but may actually involve the thyroid. Since the thyroid gland has a specific relationship with the pituitary gland and the adrenal glands, involvement of one or the other as a primary source of imbalance may be misconstrued as a primary thyroid dysfunction.

So, fundamentally, there are really three possibilities for functional thyroid involvement. The first is a primary dysfunction of the thyroid gland. The other two are imbalances in the pituitary or adrenals reflected as a thyroid involvement. Often these other two can be identified by the relationship of the levels in the other factors evaluated as part of a thyroid assessment. Specifically, this involves an expanded assessment of the blood
and its components.

Sometimes additional parameters must be tested to accurately isolate the source of the imbalance and associated dysfunction. Since the thyroid gland maintains an active and intimate relationship with the adrenal and pituitary glands, an imbalance in either one can produce thyroid-like symptoms. The thyroid itself plays a major role in digestion and metabolism. The subjective indications for primary and secondary thyroid hypo-function can include morning headaches that wear off as the day progresses, resting muscle cramps, frequent infection, slow healing, chronic digestive problems, and excessive sleep requirements, to name a few.

Textbook hypothyroidism exists when symptoms and serum tests show elevated TSH (thyroid stimulating hormone from the pituitary telling the thyroid to work harder), low T4 (thyroxine produced by the thyroid and sent to the tissues), and low T3 triiodothyronine converted from T4 to affect cellular metabolic processes). However, most of the time, hypothyroid symptoms and serum levels usually do not correlate very well.

Several other peripheral chemistries, which are very helpful in confirming a suspicion, are too numerous to mention at this time. A brief general summary of an expanded approach is presented in the following illustration.

Blood chemistries are the best way to determine which type of thyroid hypo-function to suspect. The following overview is presented as an example of how otherwise normal findings might be utilized in establishing the cause of related symptoms.

In light of the delicate balance in which the thyroid gland participates it is critical that a distinction be made between a major thyroid problem and a mere thyroid involvement so that the appropriate solution can be put in place to target the cause of these non-specific symptoms.