In How To Build A Better Body – Part 1 we went over how to achieve better and faster fat loss results. I told you to train like a speed and power athlete, not like an endurance athlete. I also told you to train metabolically, as opposed to aerobically, for fat loss and to get out of the fat burning zone! In part 2 of this series we are going to address the topic of gaining lots of lean muscle mass!

Having muscle on your physique does not make you a bodybuilder! Bodybuilding is really in a class all its own. Don’t confuse bodybuilders with those individuals that are simply seeking to add some quality lean muscle to their frame. Just because someone wants to build more muscle, does not mean that they want to become a massive bodybuilder, nor does it mean they should train like a bodybuilder in order to add the extra muscle they seek.

Adding extra muscle is more often than not a big part of the process in building a better body for most people. Building as much muscle as possible is often the goal of most bodybuilders. Don’t confuse the two. Let’s look at why you shouldn’t train like a bodybuilder. 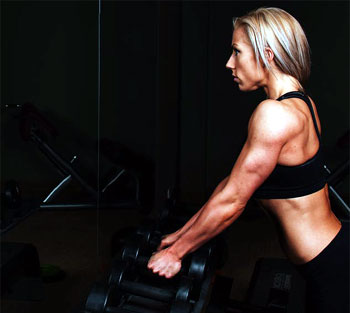 Why a Bodybuilding Style Program Will Not Work For You!

I can guarantee that not many of you want a massive and bulky physique like a professional bodybuilder, especially none of you ladies. The majority of you, male and female, probably want a more lean and athletic looking physique. So, why would it make any sense to train like a bodybuilder?

Let’s look at a few reasons why a bodybuilding program will not work for the majority of the population and why not just anyone can become bodybuilders!

There is a gene called myostatin that all of us have and its function is to stop excess muscle growth. It’s a protective mechanism to limit muscle growth because all that lean tissue is so calorically expensive to keep. In 99% of us, it is functioning correctly. There is however a small percentage of the population that this gene works differently and will allow them to gain muscle past their functional need for it! There are varying degrees of this and I am not saying it is the deciding factor, but it is one of them! I am by no means saying bodybuilding is easy, but I am saying these certain people are in a better position for packing on muscle than the rest of us.

Bodybuilding routines that are taken straight out of “muscle magazines” are usually all the same. They are generic and don’t work for the majority of the population. They also recommend really high volume and low-frequency style programs. Does this “weekly routine” sound familiar?

Yes, that’s right! It’s the same program that appears in just about every magazine or book claiming it’s the “Massive Pump” or “Get Huge” workout. It is not only fabricated nonsense, but it is also too short-sighted. Spending one day on each body part once per week sounds great and all, but is it doing you justice? Think about this, you train your chest once per week for 12 weeks. At the end of 12 weeks the chest muscle has only had 12 possible chances for it to grow. How much do you think you can achieve in 12 sessions? At the end of the day, all you are doing is 12 sessions for each body part in a 3 month period. Want a big chest for the summer? Well, you’d better have started much earlier!

The overall tempo of the exercises are just too slow! TUT or “Time Under Tension” was the big thing years ago. Take the bench press as an example. Again, that would translate to slow eccentric (lowering) and slow to medium concentric (raising). Or a 4-0-2 second count tempo or mind-muscle connection. Well, it sounds good. Exposing the muscle to constant tension, and therefore, creating more damage to the muscle and more growth, right? Wrong! If you utilize this slow type of contraction you are essentially lightening the load you are potentially lifting. If you lift a submaximal weight, you are not taxing all of the muscle fibers that are available. Yes, you are frying the ones you do recruit, but the submaximal weight will fail to recruit the “high threshold” (Type 2B) muscle fibers and these high threshold muscle fibers are the ones that have the most potential for growth and result in the largest strength increases.

The nature of bodybuilding training is to isolate muscle groups with dozens of sets of dozens of reps and hammer them into submission every time they are trained. Yes, it’s painful, but it is low-to-medium intensity. The muscle group is trained with submaximal weight in a “straight sets” manner which means one set after the other for the same body part. This may work for bodybuilders, but for us mortals, it simply will not work! Low-to-medium intensity exercise initiates a stress response. Any of you heard of “cortisol”? It is another protective mechanism (hormone) that, when stressed, will be released and break down body tissue for energy.

This means any tissue since it has no preference! This means it will attack muscle and fat simultaneously! Low-to-medium intensity exercise is a stress to your system and causes this cortisol release. It has been said to be a side effect of when our ancestors were migrating over and crossing long distances and the body needed steady amounts of energy to be released. The body didn’t know if this type of exercise was going to be used for a long time so it used the metabolically expensive muscle tissue as energy so it could protect its precious fat stores. Cortisol is the thorn in your side when it comes to fat loss and muscle gain! There isn’t much we can do about the first point that I made above except maybe choose your parents better! We can, however, manipulate it by getting the other 3 points just right and maximize our potential gains!

So How Should You Train for Increased Muscle Mass?

I mentioned above that bodybuilding programs have too much volume and not enough frequency in their programs. So what do we do? We decrease session volume, not overall volume! For example, we will perform the following:

I also mentioned that slow tempo training is counterproductive and wrong for most of us. Well, this one is rather simple. Lift fast and/or heavy! Lifting fast will recruit more “fast twitch” muscle fibers. Why do you think they are called fast twitch! These fibers are more responsive and will grow a lot faster than the smaller, weaker and more endurance orientated slow twitch fibers. The other way to stimulate these fibers is to lift heavy! Do you think Olympic sprinters lift slow? Of course they don’t! They lift fast and they also lift heavy! Lifting heavy will force the body to recruit as many fibers as it can in order to move that massive weight! 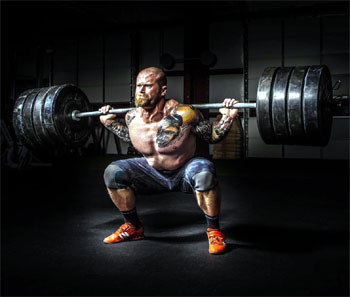 And as a protective mechanism, it will give you some nice, high quality muscle and strength so you’ll be able to get it off easier next time! This equates to limiting each set to 6-7 reps and lifting the weight fast! 3 sets of 10 equates to 30 reps, right? Well look at it this way: if you perform 5 sets of 6 reps, you have the same amount of repetitions, but a lot more work is done because of the heavy weight!

Believe me yet? It’s the same amount of total repetitions but 25% more work is done. Nice, right? Now, we have to address the whole stress response thing. We’ll use the bench press again as an example. Picture what you do after each set of bench presses. Do you stand around? Thought so! Couldn’t you be doing something more productive? Performing “opposites” or “antagonists” back-to-back will not only save time, but will also serve to raise the intensity and the density of the session. Raising the intensity of the session will still produce the stress response we talked about, but it will also produce the muscle “preservatives” (hormones) testosterone and growth hormone in much greater quantities. The result? The cortisol still has to break down something but the majority of this will be body fat now. Sounds great, right? In How To Build A Better Body – Part 3 we will address how to train for improved conditioning!

My training philosophy is to always train individuals like they are athletes. Even if they are not competing in any sport, they can gain from this athletic approach. We are all designed to perform like athletes. The athletic approach can help anyone achieve their health and fitness, fat loss and muscle building goals! See my profile page for more information!