You are at:Home»Muscle Building»Free Weights vs. Machines – Which is Better for Building Muscle

The debate has gone on for years. Ever since machines were put into your local gyms not too long ago, the argument of “which is better” has ensued. These machines were created by companies looking to put more glamorous appeal into the local fitness centers. People look at dumbbells and think, “That looks way too hard!” and end up running the other way. So, in comes the machines and all of a sudden, exercising doesn’t look so intimidating to the average Joe.

There’s something about people and exercising that over the years, because of the amount I’ve done on a regular basis, I’ve never understood. I see way too many people exercising for short periods and not making it a part of their lifestyles. There’s no wonder we have such an obesity epidemic in our society today. So we must understand when we put our muscles through movements in the gym for an hour, that we have another 23 hours in the day, although about 8 hours of them are spent sleeping, to put our muscles through all kinds of various movements.

Exercise needs to be an everyday thing, not a once in a while thing. So when we decide between free weights and machines, we need to keep in mind that we’re exercising to get better at natural movements that we go through in our every day lives. We’re trying to make those movements and daily tasks that we do away from the gym, EASIER! Isolation machines don’t help us achieve that as well as free weights…period.

When we do any sort of exercise, the complete movement we put our body through is called the range of motion. If the range of motion is more difficult, then we will experience better results. A great example that should be easy to understand is the classic dumbbell bicep curl. Everyone loves exercising their biceps because those are ones that really “show” your muscles. Basically, you hold two dumbbells in your hands, arms down by your side, palms facing up, and you contract your biceps until your elbow becomes completely flexed.

Now, go through that exercise again and tell me that the only muscle you used was your bicep to perform that exercise. Go ahead and try me. I’ll tell you that you probably didn’t realize that your shoulders, core, and legs were actually actively involved throughout that whole range of motion. 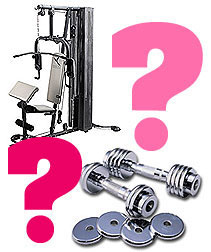 Now walk over to the bicep machine and take a seat. Rest your arms on that nice, comfy pad and grab the handles. Now pull that weight up in the same manner that you did with the dumbbells. Easy, wasn’t it! So easy that you were able to focus all your attention on the TV in front of you. In fact, you were probably able to comment on something that happened on the TV and totally forgot you were even exercising. Well, maybe that’s going a little too far, but you hopefully get my point.

So let’s look back at the muscle contractions in that last exercise, and you’ll find that you are contracting essentially your biceps on the curl machine. When you sit down in this machine, you are essentially telling your legs to take a break and further telling your shoulders that they’re not allowed here. The machine has pretty much limited the muscles used here to your biceps, forearms, and hands. Is is any wonder now that the people who spend all their time on machines pretty much look exactly the same way they did last year at this time?

Another thing about machines is that you’re pretty much limited to one exercise. With free weights, there is no limit. This is what makes having a set of dumbbells great to have at home instead of a calf raise machine off to the side in your living room. With dumbbells you can perform calf raises, as well as squats, lunges, curls and chest presses. In fact, there is really no limit if you take the time to research the types of exercises you can do with a set of dumbbells or even a barbell.

Now I don’t want to totally rip on machines because they do serve a purpose and can be very useful. With a baby boomer population getting into the later years, isolation machines are a great way to get these people into exercising to help them extend their lifespan. Also, dragging dumbbells back and forth to the rack, only to grab a heavier pair can be the dagger in your motivation at the end of a workout. But what I find most useful for isolation machines is for people rehabbing injuries. These can be excellent for those that need to strengthen muscles around certain joints.

But as long as both are around and there is a large population that uses both, the debate will forever continue. Some will always say free weights are better and have been gaining better results a lot longer. While others will argue that machines came along because they were needed and were an advancement in the industry.

The next time you’re in a gym and you happen to notice a bodybuilder, go over and ask him or her about machines. Don’t be alarmed if they snicker or laugh a little though. They’ve been using free weights for as long as they can remember. That’s all they’ve ever known to get great results and you’ll be hard pressed to convince them otherwise. So if you haven’t figured out yet where I stand on the debate, here it is:

Free weights are better than machines! Free weights involve more muscles, require more effort, and are just plain and simply going to get you better results.

Ultimately the decision on which to use is up to you. If you’re in the gym and you’re moving weight around, then I have to commend you for getting your butt off the couch and doing something great for your body and overall health. But if you’re really looking for the best results possible and you’re not sure how to go about it, always chose the free weights over the machines.

I'm a certified athletic trainer with Canada Fitness Professionals. Living in Northwestern Ontario, hockey is king, so 95% of my clients are hockey players. I also specialize in youth fitness and I train kids between 10 and 16 years old. See my profile page for more information!