You are at:Home»Questions & Answers»How Much Cardio Exercise Should I Do To Lose Weight?

I’m 5’10 and about 145 pounds. I’m wondering how often I should concentrate on cardio (jogging and walking). This week I ran about 11 miles (split over 3 days), and combined that with 19 miles of brisk walking. Is this enough for adequate fitness training? How many days per week should I do cardio and how many miles should I do every workout to lose the most amount of body fat?

Sounds like you are doing great with your running and walking regimen. According to what you’ve stated above you are logging an average of 30 miles a week of combined running and walking. Most fitness professionals would tell you that this is certainly an adequate amount of exercise for general fitness training. They would probably then tell you that a specific answer to your question really depends on what your fitness goals are. This is a competent question to ask but it assumes a goal is necessary. I think a better way to ask that question is, “What do you want out of your workouts?” The reason why this is a better way to ask you that question is that some people don’t really want an ultimate or specific goal out of their workouts. A lot of people simply want their workouts to relieve stress and help them to relax. I remember years ago I asked a client what her fitness goals were and she said, “I have so many goals and deadlines at work I really want this to be the one place where I don’t have to think about any goals or achievements.” Until that time, I had never heard anyone answer that question in such a way and it really opened my eyes. Why is it necessary to have a goal in exercise beyond the inherent benefits of the process?

In our society we tend to get wrapped up in always trying to set goals and do more. We want to run 5 miles then 10 and then 20 miles. We want to lose 20 pounds, then 10 more, and then 5 more. Now there isn’t anything necessarily wrong with this approach but it is important to understand the underlying mechanics of this approach. In a nutshell, this is a “results based” approach and it is a very cultural phenomenon. As children, we study to make the grade. We make the grade to get the better job. We work to make the money. We make the money to…you get the point. Our cultural approach is to focus on the benefits of the goal rather than the benefits inherent in the process itself. Naturally, this carries over into our fitness as well. This is why one of the first questions you will hear from a personal trainer is, “What are your goals?” But what this approach lacks is an understanding that the true power and benefit is inherent in the process itself. To illustrate this I offer the following story. 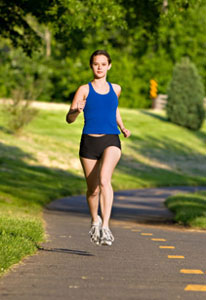 There was a time some years back when I was getting semi-obsessed with running. Always trying to increase my speed and mileage. Dealing with a few small stress injuries and frustration with my progress I called my dad (a very good runner himself) for some advice. I was rambling on about technique, training, diet, different shoes, etc. He finally said, “Well I think I may have something for you”. Naturally I was excited and I blurted out, “Sweet! What is it?” and he said, “Just an interesting article I was reading”. A crummy article? He apparently didn’t realize that I obsessively read every article in every running magazine out there and that what I needed was some wisdom! Well, ask and you shall receive.

The article he sent me was about an American runner who had heard about a renowned group of Native American distance runners and decided to go investigate the phenomenon. The Tamahura are a Native American people who live in Northwestern Mexico. These people are known to run incredible distances essentially barefoot. And this is not reserved to the elite runners amongst their people. From adolescents to the elderly, they all run vast distances and they do it almost daily. 30, 50 and 100 mile runs are commonplace. All this with very little injury, dehydration or thought to a “training diet”. The first run the American was invited on tells the key difference in their cultural approach.

He was told the group would be running to a village outpost across the canyon for supplies. To which he inquired, “How far is it?” One of the adolescent runners pointed across the canyon and said, “It’s over there”. “But how far is it?” he replied. Perplexed, the child said, “A long way”. To try to gain some sort of idea as to what pace they would be running at he asked, “Well how long do we have to get there?” The group erupted in laughter as one of the older gentleman flatly stated, “For you, a long time.” The run was a brutal stretch across broken trails that left him completely exhausted. Later that night by a fireside festival he sat down with one of the older gentlemen and inquired as to how they, even the elderly of the group, had easily finished such a difficult trail. “You have forgotten how to run” The elderly man said. “When you were a child you knew but you have forgotten”. “You ask how far and how long but these are irrelevant”. If distance and time were irrelevant, he asked, then what was the purpose (i.e. goal) of all this running? To which the man replied plainly, “To breathe”. After a long pause he finished his thought, “To breathe, in union, with nature.”

To breathe, in union, with nature. Now that certainly sounds like a healthy goal doesn’t it? The moral of this story is that it isn’t always the end result that is the goal of our exercise but the act of exercising itself. There is no doubt that 30 miles a week of running and walking is plenty of exercise and you can certainly do more as your body gets stronger.