You are at:Home»Questions & Answers»Can I Drink Lots of Milk and Still Lose Weight?

What is your opinion of commercial milk. Is it good for weight loss?

Milk, it’s that good old-fashioned staple of the American breakfast. What’s that advertising campaign say again? Oh yes its “Milk, It Does a Body Good”. It sure is a catchy little slogan. When I was a kid I remember parents spouting off the virtues of milk as if they worked for the dairy companies themselves. We were told that if we wanted to grow up big and strong we needed to drink our milk. If we wanted strong bones we needed to drink our milk. In fact, if we only had one thing in the morning before jumping on that school bus, you made sure to at least drink your milk! The fact that I didn’t particularly like the taste was irrelevant because clearly it was some type of magical potion that transformed scrawny little boys into muscle-bound men. So I, like most kids chugged it down by the gallon.

I don’t blame my parents for putting a glass full of this stuff in front of me at every meal since they were simply doing what they thought was right based on what they were being told through the media. And now that I am a parent myself, I realize my parents were handicapped by the fact that they didn’t have access to one game changing piece of technology. They didn’t have the Internet. It’s funny how much we take the Internet for granted but just 20 years ago it was very difficult for the general public to research anything. Not only was there very little access to research but we had very little access to each other. Our communications were generally confined to the media and our circle of friends. Flash forward to the present day and I can pull up 20 research articles on just about any subject from all over the world in less time than it takes to, well, pour a glass of milk. 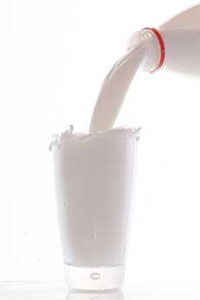 So does milk really do a body good? Well that obviously depends on what research you want to believe but without getting ourselves caught under the weight of research here (though I highly suggest you do so when you have time) let’s just use some common sense. Cow’s milk is specifically designed by nature to nourish infant cows and not humans. Just as goats milk is designed for baby goats and cats milk is designed for kittens. Humans, being that we are also mammals, have our own design of breast milk to nourish our children. Now even though all of these mammals have their own designer milk to nourish their species, there is one constant that remains throughout. They all stop drinking milk once they have reached a certain stage of development.

While it is true that commercial milk does contain protein, calcium and other nutrients, these nutrients are all found in other foods. Not only do countless other foods contain these nutrients but they contain them in much greater quantities and are more easily assimilated in the human body. If our diet is full of nutrient dense foods like fish, leafy green vegetables, fruits and nuts then there is no doubt that we are getting every bit the nutrition that milk can provide. So the question of drinking milk for weight loss, in my mind, is answered by the fact that we really shouldn’t be drinking it anyway. Remember that after a certain age of infant development, the only liquid that is consumed by any species in nature is water. And we humans can benefit greatly by recognizing this fact.