Can I drink as much diet soda as I want? Or is the zero calories on the can misleading?

Before getting into the details of answering your question let’s take a fun look back at how this product made its way into mainstream distribution. Diet soda got its start back in 1952 when Kirsch Bottling Co. launched a sugar-free ginger ale called No-Cal. This beverage was originally intended to provide a soda option for diabetics. By 1960 a few other soda distribution companies saw a small niche and also released “dietetic” versions of their sodas to accommodate people with diabetes. Sales of these products were hindered because the general perception was that these beverages were intended for those with diabetes. During the 1960’s and 1970’s there were many companies releasing dietetic versions of their sodas and several of these used cyclamate sweetener until 1969 when the US government placed a ban on the sweetener. As demand for new artificial sweeteners for soda and other products increased, more artificial sweeteners were introduced for use.

The most interesting phenomenon began to unfold in the early eighties that completely changed the marketing landscape for not only diet soda but for any product that could use artificial sweetener and be called “Diet”. The 1980’s are often dubbed the fitness decade because of the boom of attention that was placed on fitness and diet. This new fitness craze also coincided with many more women entering the work force and becoming more “independent”. This new fit and independent woman got an added label from marketing as the “new sexy”. No longer were women portrayed in the media as the sexy but conservative mom next door. This new sexy woman now wore a short skirt and a power suit. And at the beach she wore smaller and smaller bikinis to show the results of her new fitness. The fashion industries soon followed suit showing models that were fit and generally thinner than in previous decades. And the media quickly glorified this new independence and sexuality by showing models in fewer and fewer clothes. So now marketing had the perfect storm for a massive push for diet soda and diet products in general. 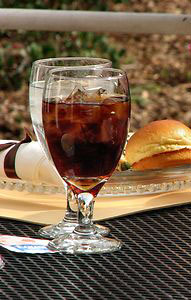 This is a very interesting lesson on how products and industries are created in the mainstream because before this massive media push for the new sexy, fit, independent woman there really was no big need for diet soda or diet products except by diabetics. So advertisers needed to create the need for it. By the mid 1980’s that need had been cemented in the general public and the marketing for diet soda completely changed from a product targeted to the small demographic of diabetics to anyone who wanted to take in fewer calories in order to look better. Needless to say it worked and by the time the 1990’s arrived diet soda was here to stay.

During the 1990’s the diet soda industry marketed heavy to men trying to get those 6-pack abs as the marketing machine will leave no stone unturned. Again it worked and by the year 2000 marketing had gotten their product into the hands of anyone who was conscious of their physique. Nowadays you are just as likely to see a diet coke in the hands of woman as you are a man. And even scarier, it is becoming just as likely to see it in the hands of a child. Why is it scary? Well, let’s take a look.

Artificial sweeteners like aspartame (NutraSweet®) and sucralose (Splenda®) can contribute to many additional side effects. Sucralose, the sweetening agent in Splenda®, is actually made from sugar (sucrose). The advertising campaigns for Splenda® never cover how chemists then add three chlorine molecules to these sugar molecules to create the final product. In many animal studies, its been revealed that sucralose can cause:

The results of multiple studies have shown complaints and testimonials that aspartame can trigger or worsen the following diseases:

The bottom line is to research the use of aspartame and artificial sweeteners on your own and decide for yourself if you want to continue consuming these products. I would highly recommend switching from these diet sodas to good clean drinking water. Water is your best choice to hydrate your body and also helps you stay fuller longer which is beneficial when your goal is to lose those extra pounds and inches!