You are at:Home»Product Reviews»Cubii Review – Under Desk Elliptical Trainer for Office Workouts

The Cubii is the world’s first under desk elliptical trainer and it’s perfect for burning calories while you’re working in the office or at home. It fits directly under your desk and provides different levels of resistance while you pedal your way to a leaner and healthier body. The Cubii is portable and comes with a convenient handle on the top so you can carry it around to different locations. Not only does it burn calories, but it also allows you to increase circulation in your legs and keeps you loose and limber while sitting in your office chair during a long workday. It’s the perfect solution for multi-tasking at work so you can to stay active and get in a workout during a hectic day.

The Cubii also comes with Bluetooth which connects to an app on your smartphone and provides a user-friendly interface for easily keeping track of your calories, strides, miles and minutes. You can also set workout goals along with a reminder to notify you each day when it’s time to workout.

Setup Process
When the Cubii arrived, I was honestly dreading opening up the box because I thought putting the machine together would probably be difficult and take quite a while to assemble. To my surprise, it was extremely easy and only took about 5 minutes! Everything was very well packaged and it came with clear instructions to put the Cubii together. The one thing I immediately noticed when removing the Cubii from the box was the overall build quality. It’s extremely well made and weighs at least 25-30 pounds. The handle on the top is very useful and allows the unit to be carried easily. It comes with just a few parts and all you need to do attach the two pedals to the main unit and screw them in securely. Then you simply plugin the unit and charge it for about 6 hours. Once fully charged, just download the Cubii app to your smartphone and start pedaling.

Working Out With The Cubii
After the Cubii was fully charged, I downloaded the app to my iPhone and it was time to get started working out. I placed the unit under my desk and pulled my chair up close. Since I have carpet in my office, my chair was very stable but I needed to engage the lock on the tilt function so the back of my chair wouldn’t recline. The Cubii also comes with two chair wheel stoppers that can be placed on the floor. Your chair’s front wheels go into the stoppers to help secure it on the floor. This comes in handy when your office has wood, tile or concrete floors.

As I positioned my feet on the Cubii and started pedaling for the first time, I noticed the mechanism was extremely smooth and it was very quiet which is great when you’re working in an office setting. The unit is made of high quality materials and it feels very solid and secure. There were no squeaks, creaks or rattles while pedaling and it was actually enjoyable to workout while I was working on my computer. My first workout consisted of hitting my goal of burning 50 calories which took about 15 minutes. I set my iPhone on the desk next to me while I worked out and would glance over to see the graphics on the Cubii app display all of my statistics in real-time. I had the resistance set to the highest level and could really feel the tension on my quadriceps and calves while pedaling during my workout. 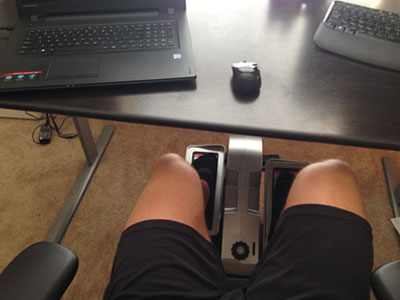 I continued using the Cubii for the rest of the week and burned an average of 75 calories per workout. I noticed that having the Cubii under my desk was a constant reminder to make sure to get my workout in along with the convenient reminder system that I enabled in the app to notify me every 4 hours on my iPhone if I had missed my workout.

The Cubii App
The Cubii app is extremely easy to use and the graphics are very nice and well displayed. The account setup process was quick and it was very easy to connect via Bluetooth. All you need to do is launch the app on your smartphone and start pedaling on the Cubii. From the dashboard, you have access to your current statistics that include your calories, strides, miles, and minutes. The progress page shows your statistics on a daily, weekly, monthly and yearly basis. You can set different goals like reaching a certain number of calories burned each day or miles covered during your workout. You can also create groups to have some fun competing with your friends.

You need to make sure to open the Cubii app on your smartphone before you start peddling or it will not keep accurate track of your progress. The great thing is that you can leave your smartphone in sleep mode to save on battery life and the app will still track your statistics accurately but you just can’t close down the app completely. I usually just kept my phone on and placed it next to me on my desk so I could glance over once in a while to see how close I was to reaching my daily calorie burning goal.

Are There Any Negatives?
There was only one thing I noticed about the Cubii that could be improved upon and that is the level of resistance. I set the dial to level 8 which is the highest resistance level and it was still a little too easy for me. I’m a 200 pound guy who works out a lot and I usually set the resistance fairly high when I’m doing cardio on a stationary bike or elliptical machine, so I might be one of the few who noticed this, but it would have been nice to have a couple more levels to increase the resistance just a little more during my workout. However, I did start feeling a sweat coming on at about the 15-minute mark during my workouts, so using a little less resistance might be a good thing in order to avoid being a sweaty mess in the office!

Overall Rating
I was extremely impressed with the Cubii and I think it’s an excellent product for burning calories in the convenience of your office while you’re working at your desk during the day. The overall build quality is exceptional and the mechanism is very smooth while pedaling. The setup process was very easy and connecting my iPhone via Bluetooth with the app was seamless. I give the Cubii 5 stars and I highly recommend it to anyone who wants to exercise and burn calories at the office or at home during a long work day. You can visit MyCubii.com to learn more about the product and watch helpful videos.

Latest News
Cubii has had great success since its Kickstarter launch. Cubii has now been approved under Mayo Clinic’s NEAT program (the science of NonExercise Activity Thermogenesis), which came back with some exciting results. Thirty office workers of varying age and body type were asked to complete the Mayo Clinic study. The results found that the subjects’ energy expenditure increased by 84.5% after using Cubii compared to just sitting. It’s interesting to note that when people go from sitting to standing, energy expenditure only increases by about 16.7%, so the Cubii can make a big impact on burning calories. They also have a new product called the Cubii Jr. which allows users to keep track of their progress on a built-in monitor versus the mobile app. Cubii is now live on BestBuy and the Cubii Jr. will be featured on an upcoming QVC segment. Cubii is also launching in stores with b8ta, beginning in May of 2017. They will be starting with Santa Monica, California, followed by Austin, Texas and San Francisco, California.