You are at:Home»Sports»Want To Be a MMA Fighter? Truth About Mixed Martial Arts

Maybe you’ve been practicing the martial arts for years. Maybe you were the best wrestler on your high school or college team, the best boxer at the Golden Gloves gym where you’ve conditioned, the best kickboxer or Muay Thai artist in your class; you can supply the most effective holds in a takedown. But is any of that enough to be a mixed martial arts fighter? Not likely.

While you should certainly play to your strengths, you definitely need more than one. MMA is called Mixed Martial Arts for a reason. It is the ultimate in fighting, calling on the use of all combat skills, recruiting all body parts which include the arms, fists, elbows, knees, legs and feet. You have to be able to take some punishment, unless you manage to get in the octagon or cage with someone who is completely overmatched. So perhaps the first question you should ask yourself about becoming an MMA fighter is whether you are really MMA material? Not whether you can throw or block a punch, deliver an elbow or kick, but whether you have the toughness to win. Yes, win!

Regardless of which level of competition you’re involved, you have to think in terms of winning all bouts. MMA is not baseball; you cannot play the probabilities and decide a .600 winning percentage is okay. It’s not for fun or fitness. MMA is a blood sport. You need to already be at your peak level of fitness before the promoters lock that cage door behind you. Winning means you likely will not be the one who gets knocked out or the one in a submission hold on the mat. MMA fighting takes a lot of nerve, as well as endurance, strength, power, agility, handling (hand-eye coordination), speed, flexibility and durability. 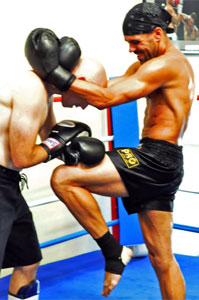 Let’s not forget brains. Like a poker player or a baseball pitcher, you can psych out your opponent. My nephew, an MMA fighter, recently told me about a fight he had with a guy who had “huge arms” while my nephew pointed at his left biceps briefly while telling the story. The guy caught my nephew on the back of his head with a blow, and it left an intense, dull ache. My nephew shook his head, he said, but then the guy started to step back, and his eyes widened when he saw the fire in my nephew’s eyes. My nephew unleashed a volley of punches and the guy fell to his knees. My nephew quickly put him in a submission hold and got the victory. It would have been easy for my nephew to have become dizzyingly angry and out of control, swinging wildly and that likely would have led to him laying on the mat.

So how do you train for a sport which recruits a collage of skills? You train like the gladiators did and realize that you will fight in a cage. The cage will be in the shape of an octagon, like Rome’s Coliseum. The gladiators took a considerable amount of punishment, and you might too. They were outfitted with swords, however. You won’t need one, because you will fight another human being, not a wild animal that by nature might have more than eight times your strength as well as many other advantages. If you’re serious, these are the questions you need to ask yourself:

Let’s say an honest appraisal supports the conclusion that you do indeed have the necessary ingredients to be an MMA fighter. What’s next? You need to look at your overall fitness. As I said, this is a blood sport. You must be in tiptop shape. Regardless of your age, get a physical and then get a coach. A coach or trainer will be an invaluable asset. They will keep you grounded and on track, provide realistic assessments and help motivate you along with helping you stay disciplined. Your coach can often see what you can’t, and because their reputation is built on the successes of their protégés, they have enough at stake to work their butt off to make you the best you can be. These are the things a coach should do:

There are 5 Basic Dimensions of Fitness: 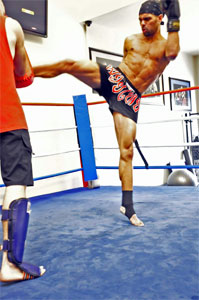 There are also sports specific aspects of fitness as well such as balance, agility, speed, coordination, reaction time and power. These are the main ones that are usually cited, and I mentioned many of them earlier in this article. Your coach will need to focus training on eliminating any weaknesses and improving upon any skills that are specific to MMA fighting.

Once your overall fitness is at a level that your coach deems acceptable, they will start you on a conditioning program. Conditioning programs are sport or activity specific. This means they are designed to help you meet a particular goal, such as increasing your power. Power is force, which is a combination of speed and strength, related to mass (weight here on earth). That is why there are weight classes in fighting. Building power helps to prevent falls, which would help with balance and this may involve doing speed squats. How power is developed depends on the muscles and/or joints that are being trained and on how much training they have had. The power in some muscles and joints is improved via fast movements, and slower in others. For instance, the ankles are so rarely trained that power in this area tends to be improved via both fast and slow movements.

I noticed the role of balance in MMA fighting recently when looking at a snapshot of my nephew just as he took down an opponent. When his opponent ducked down, my nephew caught him on his temples and forehead with both fists and a knee. Every muscle in my nephew’s back flexed, and so did the muscles in his other leg, since hitting his opponent the way that he did caused him to rise onto his toe. Without balance, he would have fallen to the mat with his opponent. The point is that muscles have to be trained to react in a particular way when needed.

I am new at Muay Thai and Tai Chi, but from what I’ve experienced so far, my nephew is correct in that the most difficult skill or adaptation to keep up is cardiovascular endurance. So any type of training that includes improving cardiovascular endurance, cross-training for instance, is important. Once you’re in a fight, whether you’re sparring or fighting for higher stakes, your skills will become irrelevant if you don’t have the energy to use them. So do you still want to be an MMA fighter?