You are at:Home»Weight Loss»Extreme Celebrity Weight Loss – Is Hollywood Getting Too Thin?

Want to find out which one of your favorite celebrities lost the most weight? Well, you’re in the right place. Here is a list of Hollywood celebrities who dropped a bunch of pounds and got skinny. Whether it was for a role in an upcoming movie or because they were just carrying around a few extra pounds, you will find out why they did it and to what extremes they had to endure in order to shed the excess weight.

Please note, these extreme celebrity weight loss stories should not be followed. Many of these celebrities dealt with serious health consequences due to their strict diet and exercise regimens. Several of these celebrities still feel the side effects of their extreme weight loss to this day. The safest way to lose weight is to focus on eating a nutrient dense diet and by creating a small calorie deficit of around 500 calories per week. This way you will slowly lose the weight and it will be easier to keep it off for a lifetime.

Christian Bale lost over 60 pounds of body weight for the movie The Machinist. He ended up at a final weight of only 120 pounds at over six feet tall! Christian’s body was absolutely emaciated and it was shocking to look at his extremely thin physique throughout the film. What’s also shocking is that Christian then immediately beefed up and packed on close to 85 pounds for Batman Begins. He now admits he’s proven he can do it and probably won’t be tempted to again because of the serious health consequences. 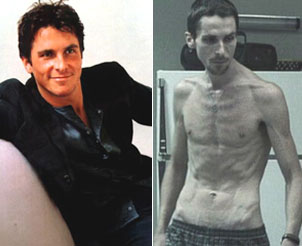 “I wouldn’t want to take it to that extreme again, because firstly, it was necessary to lose weight for that role – not as much as I did – but it was a challenge mentally to see if I was capable of doing such a thing,” Bale told reporters while promoting Terminator Salvation. He also dropped a significant amount of weight during the production of Rescue Dawn.

Matt Damon lost almost 50 pounds for his role in Courage Under Fire. Damon’s character was a heroin addict and he needed to realistically play the role, so he decided to go to extreme measures to lose the weight. 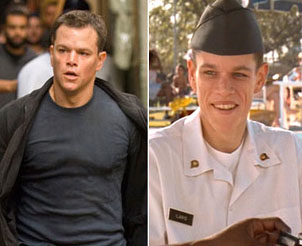 Damon now regrets starving himself for this role because it led to serious health consequences. He admits his strict exercise routine and diet plan were way too severe. He says, “I went too far. I got sick and I wouldn’t do that again because it was just too much. At the same time it helped the performance. I didn’t have to act at all, I was a wreck. I was getting dizzy spells and hot flashes. I didn’t say anything to anyone for a while because I was afraid I might be really ill.”

Tobey Maguire lost 20 pounds in just four short weeks for his role as a troubled Marine who is left shattered after being taken captive in Afghanistan in the war film Brothers. 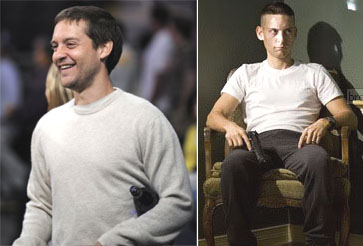 Maguire said, “I cut my diet down to 1,200 calories a day, with lots of cardio. I would run 6-8 miles every day. You get into a weird mindset and get so tired. I couldn’t eat much food and I had to workout a lot. When I was shooting I was only doing about an hour and a half a day, but when I wasn’t at work I was working out three hours a day.”

Fergie, who is a singer for The Black Eyed Peas, spent a few months on an ultra strict diet plan and exercise routine. She lost about 20 pounds from an already fit body and got down to a very lean and thin physique. Unfortunately, being this lean means that her voluptuous and womanly curves were diminished greatly. 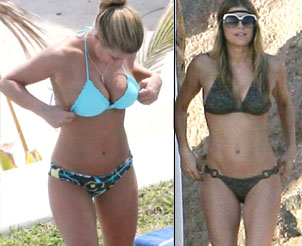 Many personal trainers we spoke with think this is too extreme since doing so much cardio along with a severely restricted calorie diet will eventually lead to muscle loss. Muscle tissue is one of the most metabolically active tissues in the body, meaning that the body burns a lot of calories just to keep the tissue healthy and functioning optimally.

It’s definitely not a good thing to lose muscle because it decreases your metabolism. If you decide to increase your calories back up and cut down on the cardio, you will most likely start packing on body fat.

The smart plan is to slowly decrease calories and focus on a weight loss of around 1-2 pounds per week. This will allow your body to maintain your lean muscle tissue, while you burn off unwanted body fat.

Nick Carter, the former member of the Backstreet Boys, is in great shape after losing 57 pounds of fat from his physique. Nick used to weigh in at a hefty 224 pounds during his stint on the House of Carters reality show. He also started to feel the physical pains of an unhealthy lifestyle during a European tour with the Backstreet Boys. Nick began to suffer from chest discomfort, so he went to a cardiologist and discovered he suffers from cardiomyopathy, which is a weakening of the heart.

Nick finally decided to shed some of his excess weight. He said, “I’d become depressed. Something deep down inside of me said, I’m tired of being this person and I’m a good looking guy!” He is now down to a lean and healthy 167 pounds and is feeling great. 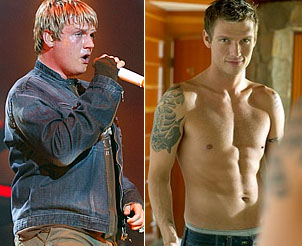 Nick Carter’s Diet Plan
He eats every 3 hours and limits his calories to 1,400 per day. His diet plan includes lots of Power Bars and salads. He also limits alcohol intake, but does allow himself a cheat day for ice cream once in a while.

Nick Carter’s Workout Routine
Initially, he hit the gym 6 days a week. He would focus on lifting weights and using the elliptical machine for cardio. He is now working out with a personal trainer and his fitness program includes weight lifting, boxing and cardio workouts 5 times a week.