You are at:Home»Weight Loss»Why Eating Breakfast Every Morning Helps You Lose Weight

So many of the goals you set for yourself regarding weight loss are predicated on the notion that you must stomp out certain daily habits and eliminate what you may consider small pleasures, much deserved rewards, or even sanity-saving timeouts in the face of your increasingly hectic and stressful life. While renouncing jelly beans as the fifth food group and canceling the TiVo subscription are undoubtedly effective strategies in your quest to shed a few (or many) pounds, such drastic tactics often lead to a sense of deprivation which is the saboteur of all saboteurs, despite your strongest intentions.

In reality the idea that losing weight is only about TAKING AWAY is a misconception. There are habits you can actually acquire and ADD to your life to speed your progress and ease your sense of deprivation. One such habit is eating breakfast.

It may seem counterintuitive to add calories when weight loss is your primary goal, but study after study provides concrete proof that people who eat an early morning meal are slimmer than skippers. Perhaps in what is the most comprehensive study of weight control to date, the National Weight Control Registry has tracked the habits of 4,000 people who have lost a minimum of 30 pounds and have kept it off for at least a year. The eye opener? Eighty percent of the ongoing study’s participants eat breakfast.

The science behind adding morning calories in order to reduce overall daily caloric consumption is simple. After fasting for eight or more hours during sleep, the body’s morning blood glucose levels are low, which is dangerous territory because glucose fuels the brain and all physical activity, including light before noontime activities such as stretching, driving to work, checking email, and even speaking.

Without replenishing glucose levels by eating breakfast, two things occur, and both bode badly for dieters. First, in sensing a lack of available calories, the body’s metabolism lowers in order to conserve expenditure of energy, which means you will automatically burn fewer calories during the morning hours. Secondly, in response to this perceived deprivation the body increases production of cortisol, the stress hormone that leads to fat storage particularly around the midsection. Moreover, with glucose levels low and cortisol levels high you are poised to become ravenous as the day goes on and it becomes nearly impossible for you not to overeat later. If you don’t believe this, prove it to yourself by keeping a food journal for two weeks. Skip breakfast during the first week and track your overall daily calorie intake. Eat breakfast everyday the second week and again write down your overall daily calorie intake. Chances are you eat less over the course of the second week than the first. 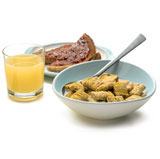 Nutritionists say to aim to eat as little as 250-300 calories or as much as 1/3 of your total calories for the day at breakfast, and a recent study from the University of Texas at El Paso confirms that breakfast eaters consume an average of 100 calories less per day than those who do not. This amount may seem negligible, but the small deficit adds up to a 10 pound weight loss over the course of a year simply by ADDING a meal. Another recent study suggests the possibility that the number of calories dieters eat for breakfast is approximately the number of calories they shave from their overall daily intake. For instance, if a breakfast skipper eats an average of 1800 calories per day and then starts eating 300 calories for breakfast, his or her daily caloric intake will drop from 1800 calories to 1500 calories. Not a bad deal.

It is important to remember that the merits of a morning meal extend beyond weight loss. Eating breakfast within an hour or so of waking ensures clearer thinking, less stress, and more feel-good energy. If you are a skeptic then return to the journal experiment mentioned above to prove this claim by taking notes on how you feel hour to hour throughout the day first during the week you don’t eat breakfast and then during the week you do. You will see that eating breakfast corresponds to having a brighter outlook, more focus, and more stamina.

Learning to stomach breakfast is half the battle. The other half is eating the proper combination of macronutrients. Prepare and eat a breakfast that is high in fiber and lean protein, moderate in healthy fats, and adequate in low-glycemic carbohydrates. Even top fitness professionals who are severely restricting their carbohydrate levels in order to lose body fat continue to eat low-glycemic carbohydrates along with lean protein in the morning. Eating simple carbohydrates alone (such as an apple, a piece of white toast, or a pastry) is the reason why many people complain that eating breakfast makes them hungrier. Simple carbohydrates spike glucose levels and it is the following crash that causes people to feel hungry again only a few hours later.

The usual excuses for not eating breakfast, in addition to the misguided attempt to cut calories in order to lose weight, are lack of time and lack of appetite. As a counterpoint for the first excuse, consider the breakfast of Olympic champion Michael Phelps. On a given morning the swimmer eats three fried egg sandwiches with the works, a bowl of grits, three slices of French toast, three chocolate pancakes and two cups of coffee. No one is suggesting such a feast for someone who isn’t physically engaged in hardcore training for eight hours a day every day, but if Phelps can find the time to eat this much in between training and winning seven gold medals, you can surely find time to eat just a fraction of this amount in between waking up and making your morning commute.

As far as the second excuse goes (lack of appetite), remember that it may take several weeks for your body to become accustomed to wanting (and receiving) food in the morning. In the meantime you can make acquiring the new habit more enjoyable by following a few guidelines. While some experts suggest automating your breakfast by finding one or two things you like and eating them every morning to keep yourself on track, the fact remains that your time constraints, energy requirements and tastes change throughout the week. A peak into the diet journals of nutritionists reveals a bevy of breakfast options to suit your needs, so feel free to mix and match as you please.

ON WEEKDAYS
For the habitual sugary cereal eater who is in a slump: Try mixing five or six high-fiber, low-sugar cereals, such as shredded wheat, low-fat granolas, and bran in one bowl. Add some walnuts, dried fruit and plain milk or soy for balance.

For the fitness enthusiast who trains in the morning: Pack a cup of nonfat Greek style yogurt along with fiber-rich berries, such as raspberries or blackberries, and an ounce of nutrient-dense almonds or a few Brazil nuts. Enjoy this hunger-squelching, high energy meal with a cup of green tea prepared with a splash of nonfat milk.

For the person who has not more than one extra minute in the morning: Keep it light and portable. Toast a slice of low-calorie whole wheat bread and spread on two tablespoons of natural almond or peanut butter. To squeeze in some calcium, drink a glass of one percent milk in the car or pick up a nonfat latte on the way to work or school.

For the person who loathes traditional breakfast foods: Microwave a piece of low-fat mozzarella cheese and a tomato slice in a whole grain pita. Grab an apple from the counter and a hot cup of strong coffee from the drive thru. Alternatively, save a portion of last night’s dinner and microwave it before leaving the house or first thing when you arrive in the office. Yes, you can eat pasta or pizza for breakfast, as long as it’s the healthy variety (which of course it is…you’re so good).

ON WEEKENDS
For the Mary Poppins type: Make pancakes or waffles using a light mix from the store prepared with omega-3 fortified eggs and a quarter cup toasted wheat germ (for fiber, vitamins B and E). Instead of nutritionally devoid syrup, cook a bag of plain frozen blueberries, which are chockfull of antioxidants, in a saucepan over medium heat almost to a boil, stirring in a tablespoon of cornstarch to thicken. Serve it with calcium-fortified orange juice. The little ones will never notice what they are missing.

For the farmer’s market aficionado: Pick up a loaf of whole grain olive bread or any crusty whole-grain variety. Slice it and spread a few slivers of avocado over it and cover it with the whites of three cage-free organic eggs and a piece of light cheddar cheese for some protein.

For the modern-day traditionalist: Make a bowl of Irish steel-cut oatmeal on the stovetop and top it with chopped nuts, a half-cup of blueberries, and a dash of cinnamon. Eat it alongside your favorite hot tea or freshly squeezed juice made from a variety of interesting options such as apple, carrots and ginger.

For the breakfast-in-bed lazy Sunday morning types: Whisk together one whole egg and two egg whites. Fold in a colorful array of chopped vegetables full of fiber and antioxidants including peppers and mushrooms. Add a little feta cheese or a few tablespoons of low-fat cottage cheese for a flavor, texture, and calcium boost.

For the unrepentant donut lover: Eat a bit of cheese or a single egg along with that sugar bomb in order to prevent the nasty glucose spike and crash that leads to cravings later in the day. A donut for breakfast is only truly dangerous when it becomes a donut for lunch and donut for dinner as well.

worked with Equinox gyms in New York after completing graduate school. She is also a freelance writer. I'm a certified Pilates instructor and a certified personal trainer. See my profile page for more information!