You are at:Home»Weight Loss»Losing Weight After 50 – How To Handle Eating and Alcohol Use

Article four of my five article series on losing weight after 50 years old is about eating certain foods and drinking alcohol. You won’t believe what I ate to lose 60 pounds. Here’s the list of the main diet:

As you can see, I was on a low carbohydrate (low-carb) diet. The important thing was that I was rarely hungry. I always felt full. There were maybe two days that I felt famished. Other than that, my mind was free of the pain of hunger which allowed me to focus on my life. I wasn’t distracted by food. The lack of suffering in a lifestyle change is very important if you are to succeed. I suggest you employ eating habits that are desirable like I did.

Documenting my calories and carbs didn’t work. Watching what I ate did. When I first started this routine, I read the Atkins diet. This diet (did I mention I hate that word?) uses a simple philosophy where you use your body fat as a source of energy instead of ingesting your energy through carbs. You progress in two week periods of carb intake. My current diet is sort of a combination of low carb Atkins and the Paleo diet with occasional reward periods of foods outside these areas. 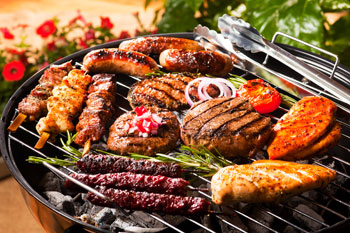 Keeping up with your routine has a lot to do with how food makes you feel. Gravitate towards food that makes you feel full by satisfying your hunger while still keeping in mind that a body needs nutrition. The feeling I get when I eat carbs is none other than a feeling of bloating. This is especially true with beer. Most beers have carbonation added to them. Carbonation expands your stomach. For me, an expanding stomach feels empty. The result is a feeling of hunger that I have to feed. Therefore I avoid carbonation.

When eating food that is high in protein and low in carbs you must realize that these will work better for you if you increase activities that build muscle. If you are taking in all of this protein, why not use it to build your body? If you aren’t taking in carbs, why not burn the fat as energy through activity (did I mention I hate the word exercise?).

As my diet progressed, interesting things happened. My tastes changed. I noticed sugar and salt much more in my food and actually grew to dislike them. I liked the taste of the food I was eating more and more. Although my menu was routine, I only grew tired of it on occasion. I would then eat something different. If the new food was carb based, I knew I would have to burn it off so I ate in quantity and made sure I did some of my aerobic routine in order to offset the carbs.

Lowering carbs is really easy if you know what to look for. Avoid anything that is the color white which includes bread, flour, rice, sugar, and milk. The exception is cheese sticks which kept me full and satisfied. I read that they are a great bed time snack as they contain the sleep agent, melatonin. Regardless, they are a quick and easy snack that you can keep in the fridge or easily get at the grocery store already prepared and ready to eat. 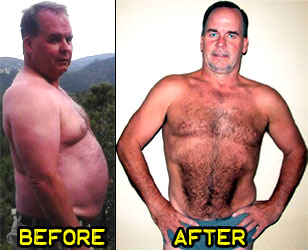 The time of day that you eat has to work for you. I pace myself over the day and eat when I’m hungry. I eat individual items instead of full meals with variety.

If I do cook, I’ll put everything in the oven together and have enough for three to five days or even a week. Then I’ll got out on the deck and workout or work on the computer while it cooks so I don’t sit there and smell the food which makes me hungry. I set my phone to go off as well as the oven timer so that I don’t burn or overcook my meals.

When I finally hit a brick wall and couldn’t get to my six pack abs, I again turned to the Internet. I read that a six pack is about reducing your body fat to a point where your muscle is revealed rather than working your muscles to a point where they protrude to a point where you can see them. This made sense as I had been working my abs very hard without achieving a six pack. I had dramatically flattened my stomach and tightened it up yet I wasn’t seeing the muscles (probably shaving my Yeti would have helped). I was doing up to 500 situps a day and 500 reps of other abdominal exercises yet it wasn’t working. I read several diets for getting a ripped six pack and settled on one where I ate egg whites, tuna, and broccoli. Even with my determination I couldn’t stay on this diet and went back to one with oranges and bananas and nuts which I introduced in the seventh month of my journey.

Alcohol
I quit drinking beer when I started my weight loss efforts. I still wanted my buzz so I read that hard liquor was void of carbs. I moved to bourbon and water and started seeing success as my weight was declining. I could still taste sugar in the whiskey yet I was losing weight.

I believe quitting alcohol shrunk my liver. There are several indicators of this. As you can see from the photos on my weight loss success story, I had a rather large beer gut. Now that I’ve lost it, I have somewhat of a shelf where my rib cage drops off to my flat and toned stomach. Because my liver resides under my rib cage, I believe that it expanded my rib cage to a point that created this shelf when my liver shrunk. Inflammation is the body’s way of telling you something is wrong. When you twist an ankle it swells. My liver had swollen from my drinking. I believe it was trying to tell me something. I shrunk it and the swelling ended. I shrunk it by eliminating alcohol. I’d rather look better than catch a buzz. I’d rather not have a swollen liver!

Keep in mind that weight loss does require a combination of activity and eating habits that compliment each other and you will lose at a faster rate and stay at a desirable fitness level. I go into detail about alcohol and eating more in my book and on my website.

My name is Scott Deuty and I'm a real life weight loss success story. I was a former fat guy who lost 60 pounds in 8 months without running a single step and I'm 52 years old. A lot of people say it's virtually impossible to lose weight over the age of 50, but I'm a living example that it's possible. See my profile page for more information!